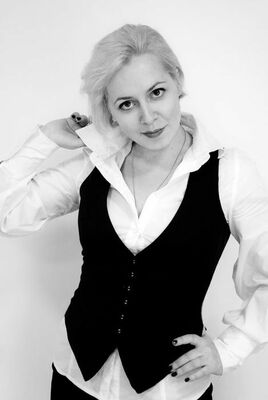 VERA﻿
Performance and video artist, a queer clown and puppeteer, a feminist and LGBT activist. Member of 'Coming Out' LGBT-organization (Saint-Petersburg). An immigrant for the last 8 years - lived, studied and worked in England, China and Finland.

My work can be described as a video/live performance collage of real life stories (exaggerated and transformed into something surreal) told by a variety of colourful personas all of which are usually played by me (often at the same time). Topics include: LGBT and women’s rights, mental health, traumas, fear and memories. What I do might not be new and ground-breaking, but it is always sincere and humane. In my works, I try to conjure the sense of familiarity, belonging, and déjà-vu. Being from a place where people like me are being silenced and disregarded, my main goal is to create a space or a situation where my audience and myself would not feel invisible or alone anymore.

MORA
In Polish folklore, mora are the souls of living people that leave the body during the night, and are seen as wisps of straw or hair or as moths. Accordingly, Polish mora, Czech můra denote both a kind of elf or spirit as well as a "sphinx moth" or "night butterfly". Other Slavic languages with cognates that have the double meaning  of moth are: Kashubian mòra, and Slovak mora.

In Croatian, mora refers to a "nightmare". Mora or Mara is one of the spirits from ancient Slav mythology. Mara was a dark spirit that takes a form of a beautiful woman and then visits men in their dreams, torturing them with desire, and dragging life out of them. In Serbia, a mare is called mora, or noćnik/noćnica ("night creature", masculine and feminine respectively).
In Romania they were known as Moroi.

It is a common belief that mora enters the room through the keyhole, sits on the chest of the sleepers and tries to strangle them (hence moriti, "to torture", "to bother", "to strangle"). To repel moras, children are advised to look at the window or to turn the pillow and make a sign of cross on it (prekrstiti jastuk); in the early 19th century, Vuk Karadžić mentions that people would repel moras by leaving a broom upside down behind the door, or putting their belt on top of their sheets, or saying an elaborate prayer poem before they go to sleep.